What are pheromones?
Pheromones are hormones secreted as a sexual attractant, usually by the female to attract a male.

How are they useful?
These can be used in insect monitoring to attract the insects present in the building to give a more accurate representaion of the insect numbers. Note that only the males are attracted, so that only half the population is caught. This can help to prevent breeding and thus reduce the population. This effect is usually only seen if pheremones are used for a prolonged period.  They are used as lures either in the glue of the trap, or as a tablet or bullet (small plastic test tube) placed in a blunder trap.

Pheromone traps are very effective and consequently, they tend to have a larger catch rate than standard blunder traps. This is a result of the efficacy of the trap and does not indicate that insects are being pulled in from the outside world.

Note that the lures are more expensive than standard traps, but they are invaluable as an early warning.

What insects can I monitor with pheromone traps?
At present, webbing clothes moths (Tineola bisselliella), case-bearing clothes moth (Tinea pellionella) and cigarette beetle (Lasioderma serricorne) are the only insects that can be monitored with pheromones. They are expensive to produce and the chemistry is complex and cannot always be replicated by synthetic pheromones.

The lures are most effective when traps are placed above floor level at temperatures greater than 18oC. They should thus be used in conjunction with blunder traps placed on the floor to monitor for insects below these temperatures. 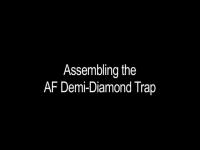